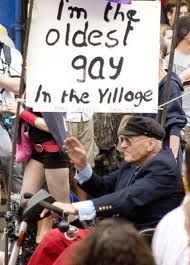 I know that good communications is all about telling good stories and it was never clearer to me than when I attended Val’s Cafe – LGBTI Ageing and Aged Care Conference this week.

This conference was directed at highlighting issues for older lesbian, gay, bi-sexual, transgender and intersex people, particularly those who require aged care services. The conference pointed out issues of discrimination and hatred for LGBTI people, fears of coming out for people who are frightened of being treated poorly because of their sexuality, gender preference or intersex status.

Attendees were reminded that homosexuality was illegal in Victoria until 1980; that it was listed as a mental illness in the DSM, (Diagnostic and Statistical Manual – a guidebook for psychiatry) until 1974. Older GLBTI people grew up in an era of systemic homophobic.

The first day of the conference was amazing for the courage and honesty that many older gay, lesbian, trans and intersex people showed when they told the story of their experience. Experiences were different, but all had faced discrimination and many had faced violence. The intense silence in the room was testament of the strength of each story, the tears and laughter proof of the sincerity and sense of humour and the many standing ovations proof that these older GLBTI people are still strong role models trying to make and maintain change for those coming after them.

It inspired me to always try finding someone who can speak of their experiences from the heart.